What Brexit Means for Bordeaux

Is there really anything else that we can write about this week?

I am more heartbroken and frustrated than I can remember being. As a British person living in Europe, this was a result that I neither expected nor wanted. But it’s now almost a week on, and reality is setting in. And even for those of you who voted Leave, it is perhaps useful to know how things look from this side of the Channel.

In many ways, Bordeaux is a strangely comforting place to be while absorbing the impact of this vote. It’s a city that has been closely linked to England, Ireland, Wales and Scotland for many centuries. There are ties at many levels, from names of chateaux such as Kirwan and Palmer that come from Scottish and English former owners, to the many hundreds of British citizens who work as wine merchants, in châteaux, as wine tourism professionals and in many other roles in the region’s wine industry.

The outcome of what comes next is crucial for France as a whole; 5.7% of all French food and drink exports go to the UK, bringing in €625 million euros per year. Regions such as Beaujolais, Burgundy and the Rhone have a huge presence in the UK market. But there is a psychological link in Bordeaux that dates right back to 1152, a date that suddenly means more to me than it ever has before. Surely a referendum isn’t going to change that? 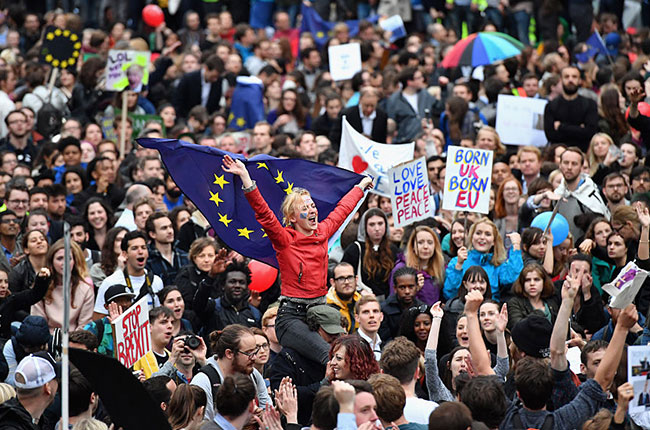 Some of the 48% of voters who wanted to remain in the EU take their message to the streets of London after last week’s referendum. Photo credit: Jeff J Mitchell / Getty News

When the news broke, the first reaction in Bordeaux was the same as it was around the world. Florence Cathiard of Chateau Smith Haut Lafitte said, ‘We all thought it would be a Bremain, what a shock it has been’. But as the dust clears (we can hardly say settles yet), that is giving way to a variety of different possibilities and options…

See which one you like the sound of most.

‘The UK market will always be very important to us’, David Ornon at Château Guiraud in Sauternes points out, ‘and we will maintain our Entente Cordiale’. The ever pragmatic Bernard Magrez is equally calm, saying that, ‘it will make no difference to us whatsoever. We have a number of tastings and events lined up and all will go ahead exactly as normal’. And on the merchant side, Yan Schyler at Schroeder & Schyler says, ‘To be honest, business will soon be back as usual’.

Christian Seely of AXA Millesimes’ Chateau Pichon Baron (and himself an Englishman), wrote in his blog this week, ‘inevitably there will be some short term turbulence, but personally I do not foresee major long term disruption. England and Bordeaux have been trading closely together for many centuries: the British market has a special place in the hearts of Bordeaux producers; and Bordeaux equally has a special place in the hearts of British wine drinkers. That special relationship, which existed for hundreds of years before the European Union, will endure. This feeling is reinforced by many conversations I have had both with fellow producers in Bordeaux, and with many fellow English lovers of the wines of the region’.

The reality, for the time being at least, is that the biggest immediate impact is exchange rate volatility. It has already led to an abrupt halt of any lingering transactions for the 2015 en primeur campaign. ‘This year we had many English merchants buying Smith Haut Lafitte,’ says Cathiard. ‘The sales went fast and well, so for this vintage we are fine. But surely the UK market will not be buying as many bottled wines over the next year as the currency drops’.

An Opportunity for Bordeaux

David Ornon has been one of many chateaux directors and merchants to point out that, just as the City of London may well find its importance dropping over the next few years, so might the London wine merchants who for many years have been almost a second Place de Bordeaux. ‘It may be that Bordeaux starts trading more directly with Hong Kong and other places, not always passing through London,’ he says.

For now, London is seeing a brisk trade. Since Friday morning, Asia and the US has been buying stocks that saw 10% of their value wiped off overnight – and it seems a number of Bordeaux merchants and chateaux are also buying back stock from the London market, which has always been one of the interesting places globally for buying older wines. Several big London merchants closed their sites for a few hours on Friday, and reopened allowing only transactions in sterling, as exchange rates were too difficult to track with the euro or dollar.

‘Certainly the ease with which we are used to trading internationally will face a few months’ suspension’, points out Hubert Lagrue, courtier and owner of Gardère-Haramboure brokerage house.
Read more at What Brexit Means for Bordeaux