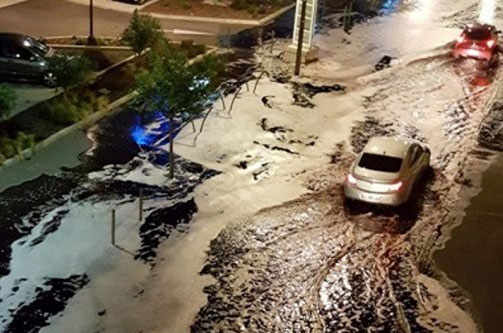 They cracked open five vats, sending wine gushing into the nearby streets of the port town. Sete is around 20 minutes by car from Montpellier in Languedoc-Roussillon.

It follows an arson attack on offices owned by the Vinadeis wine group. And it shows that anger over imports of Spanish wine has hit breaking point.

Emergency services arrived on the scene in Sete to contain the spread of wine and stop it from flooding nearby carparks. No one is believed to have been injured.

One CRAV representative told France 3 television in Languedoc, ‘Why did we do it? Because we are never listened to.’

He repeated an oft-cited allegation by the group that some Spanish wine entering France had come from South America. There is no proof.

Tension has risen in Languedoc over the issue of Spanish imports. In April, winemakers hijacked a lorry carrying Spanish wine into France and emptied its contents onto the motorway.