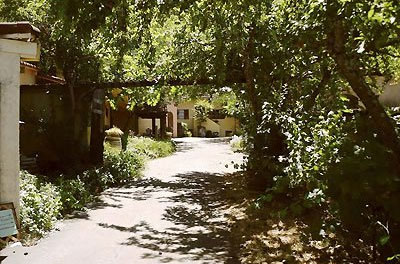 The Tuscan Village winery and community complex in Lake County was reduced to ashes by a California wildfire last weekend.

Fire crews fought to control the Clayton Fire but were unable to prevent it burning through several buildings owned by Terrill Cellars.

Local media said police have charged a man with arson in relation to the fire, which has burned through around 1,600 hectares (4,000 acres) of land.

‘Of the 16 buildings on the property all that remains is the front, partial wall on the first building,’ said Brad Terrill. ‘Everything else is ashes, charcoal, and twisted metal.’

Terrill founded Tuscan Village as a piece of Tuscany in California, opening up the complex and winery for events, including weddings.

The winery itself produced Cabernet Sauvignon, Syrah, Chardonnay and a Merlot Blush.

‘The highest rubble pile is less than a foot high,’ Terrill told Decanter.com.

‘I plan to rebuild according to the sensitivity of the community. Funding, support, assets are all part of the recovery plan.’

Police were investigating the Clayton Fire in Lake County after officials said that they thought it was started deliberately. The fire was 65% contained by Friday (19 August).

California has endured a series of fierce wildfires in 2016, although forest fires are an annual hazard. Last year, a large fire destroyed Shed Horn Cellars in Middleton, southern Lake County.

Most winemakers have so far escaped relatively lightly this year.

Fire destroyed one winemaker’s home in Monterey County earlier this month, but the area’s vineyards were left largely untouched.

Smoke taint has been a lingering concern for some producers.
Read more at  California wildfire burns winery to ashes