It tracks the price movements of the 10 most recent physical vintages of the five first growth Bordeaux châteaux.

As prevously reported on Decanter.com, a drop in the value of sterling created a flurry of interest from dollar buyers in Asia and the US.

Analysis by Liv-ex shows that interest is strongest in the ‘off’ vintages within the Liv-ex 50. 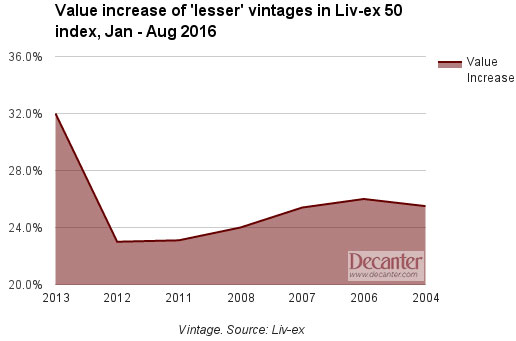 Liv-ex pointed out that, if a tracker fund had invested in one case of each wine in the Fine Wine 50 at the end of December, and sold it at the end of August, it would have made a profit of £38,538.

Geraint Carter, of BI, told Decanter.com that the fine wine market was experiencing a broader recovery.

‘The encouraging thing about the current situation is that demand is not restricted to the usual suspects – not just Lafite, not just first growths – but covers a much broader set of wines,’ he said.

‘That said, Hong Kong and the other US dollar-denominated markets are certainly leading the way and their relative preference for the younger and cheaper vintages is clear.

‘We’re not talking a repeat of [the boom of] 2010/11, but they are definitely the current favourites.’
Read more at Brexit boom’ as fine wine buyers seek lesser vintages